In February and March, a group of minor residents of the shelter attended the theater workshop "A legend I will tell you..." using the myth of Lavdakidon as a basis, children who participated in the workshop explored the content of symbols and their role in the story.

Every Tuesday afternoon the children under the guidance of the facilitator of dramatic play, Mr. Thanos Tsaknaki tried to liven in experiential way, with limited use of verbal emotional communication the thread of heroes of the House of Lavdakidon, giving the opportunity to pop the abundance and variety of incentives of human action on the path to self-knowledge and knowledge of the other.

The workshop ended on March 27 2014 with the presentation of "Antigoni" prepared by the children of the shelter at the "Dimitreio" Center for Creative Activity of Moschato that hosted the event. The young actors represented schematically, the meetings and actions of the heroes of myth in order to experience motivation, emotions, relationships, tensions and clearance. The performance was attended by the children that reside at the shelter as well as young children who attend the programs of KDAP and their parents.

The program was made possible thanks to the funding of the UN High Commissioner for Refugees under the "Symbiosis" with the support of the Stavros Niarchos Foundation. 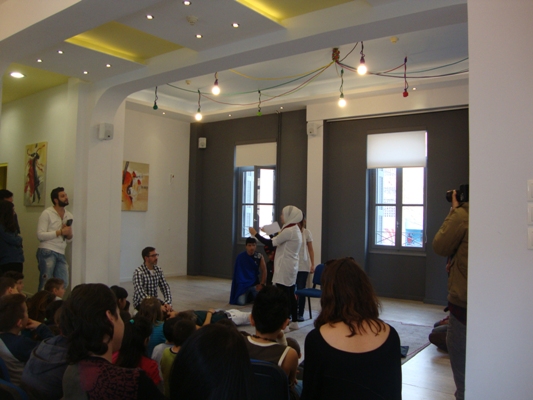